After welcome rain overnight, the pre dawn bird calls were broken to the haunting sounds of Bagpipes and Drums of the Barossa & District Pipe Band.

The ANZAC Dawn Service at Eudunda saw some 230 people attend with what turned out to be a very pleasant morning, with the Australian and New Zealand Flags at half mast.

This year the service was supported by the men and women of A Crew from the No.1 Remote Sensor Unit, RAAF Edinburgh forming the Catafalque Party. 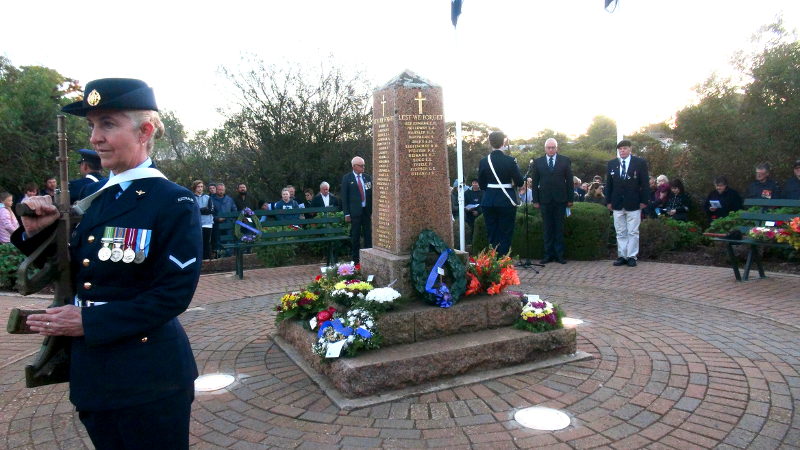 Eudunda RSL’s Andrew Partington welcomed everyone to the service

The service was led by Eudunda RSL’s Hedley Scholz,
“Today in Australia we are honouring an event, known as ANZAC Day where we remember the ultimate sacrifice which both men and women have made during the two World Wars, the Korean & Vietnam wars, the wars in Iraq & Afghanistan and other conflicts around the World”. 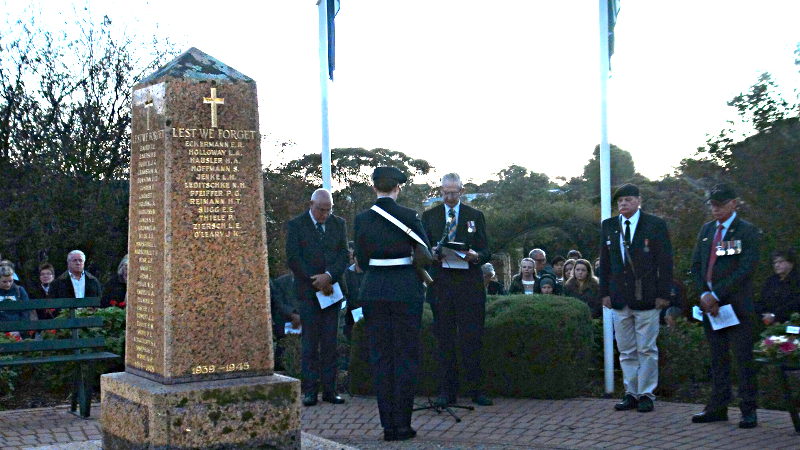 Hymns and the New Zealand and Australian Anthems were sung and the “Lord’s Prayer” recited as part of the service. 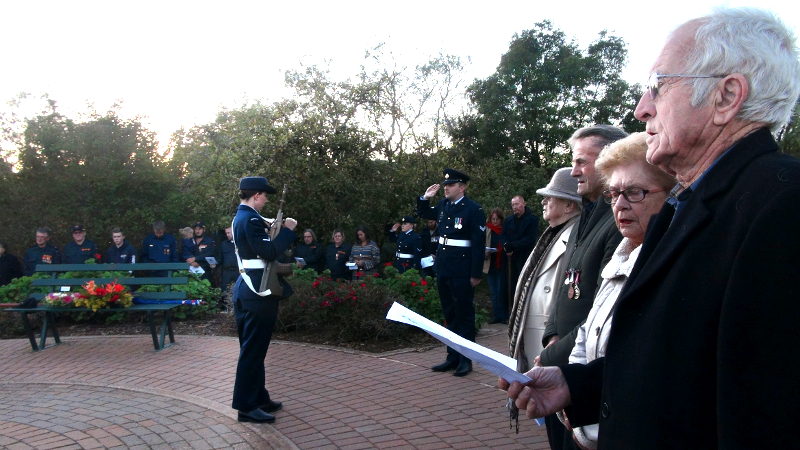 A lone piper played to start the laying of wreathes in memory of those who have fallen. As many organisations and individuals offering tributes, the rest of the band joined in the make it a unique experience.

Below are a few of those laying tributes. 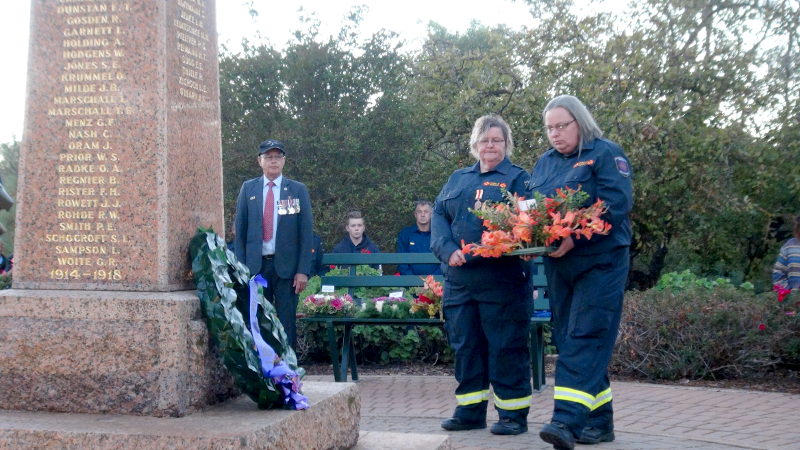 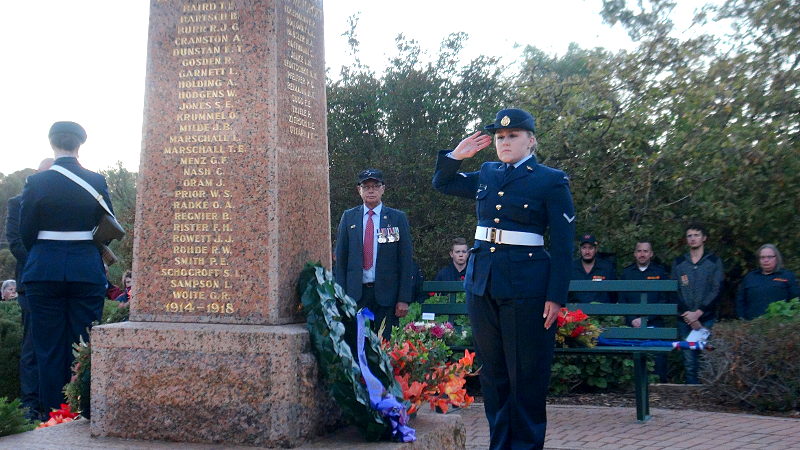 LACW Jessica Leggeollo lays a tribute on behalf of the A Crew – No.1 Remote Sensor Unit, RAAF Edinburgh 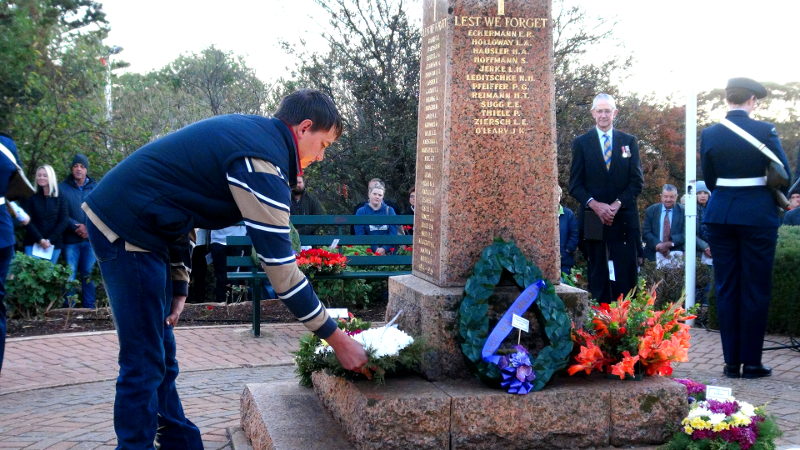 Gary Schutz lays a tribute on behalf of the Eudunda Show

Who would not be moved by the sound of the lone bugle playing the last post and then the ode,
“They shall grow not old, as we that are left grow old;
Age shall not weary them, nor the years condemn.
At the going down of the sun and in the morning
We will remember them.”

At the end of the service the memorial was decorated with lovely flowers and wreathes. 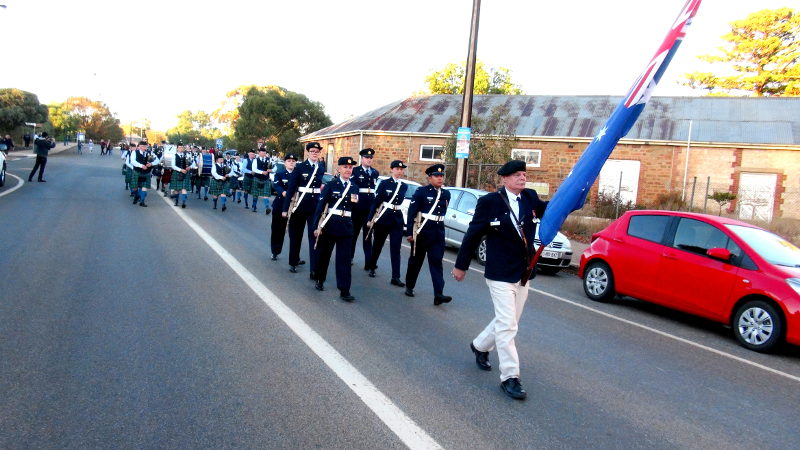 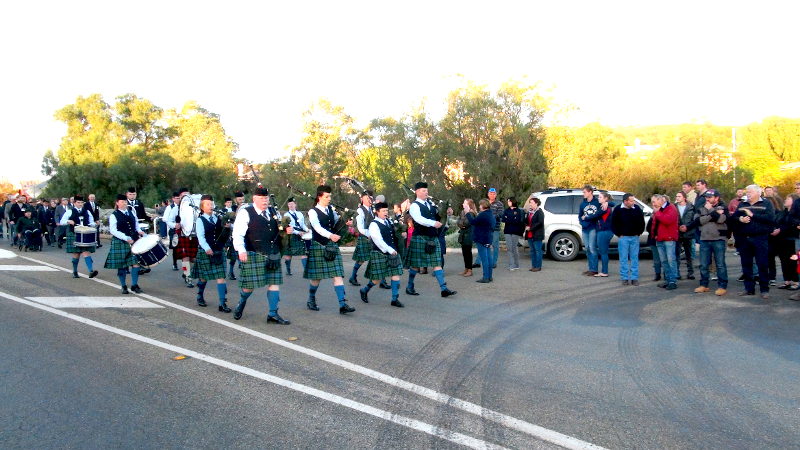 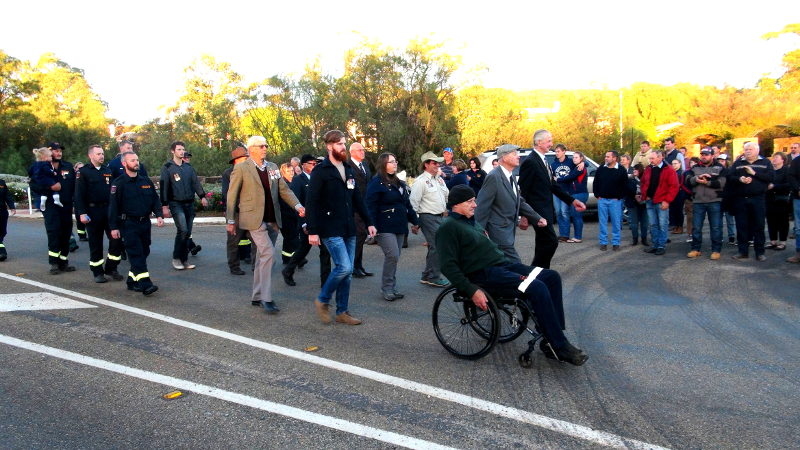 Immediately after the service the traditional march from the Eudunda Memorial Gardens to the Eudunda RSL Rooms by uniformed and serving personnel was lead by flag bearer Andy Riemekasten as they marched to the beat of the pipe band. A generous quantity of delicious food, cake, sweets and drinks was consumed while everyone chatted. 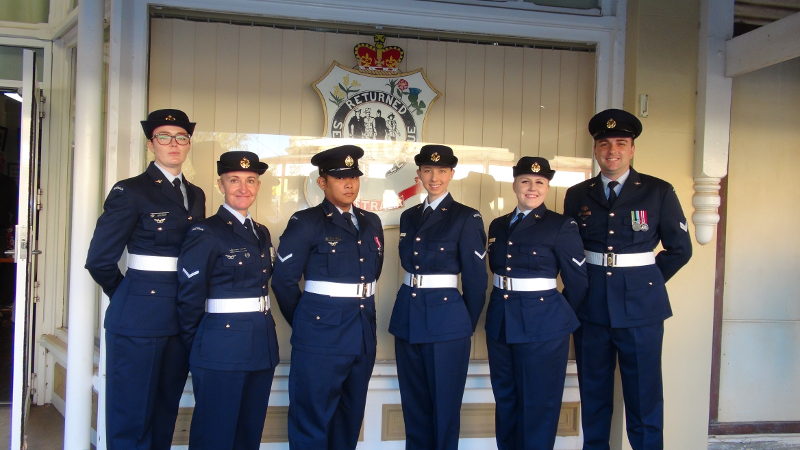 Of note was that some of the pipe band members could not stay too long as they proceeded on to the Adelaide Service where they were involved in the band there. This reminded some of us of the earlier years, up until the ‘80s when the rail service was still running. The train used to run a ‘special’ so that service personnel could attend the Eudunda service and then jump the train and march in the main Adelaide march. Some of us still remember going down with our parents to the march this way).

The Robertstown ANZAC morning service had a fine day greeted 110 people assembled to remember those who had fallen during all wars and campaigns. 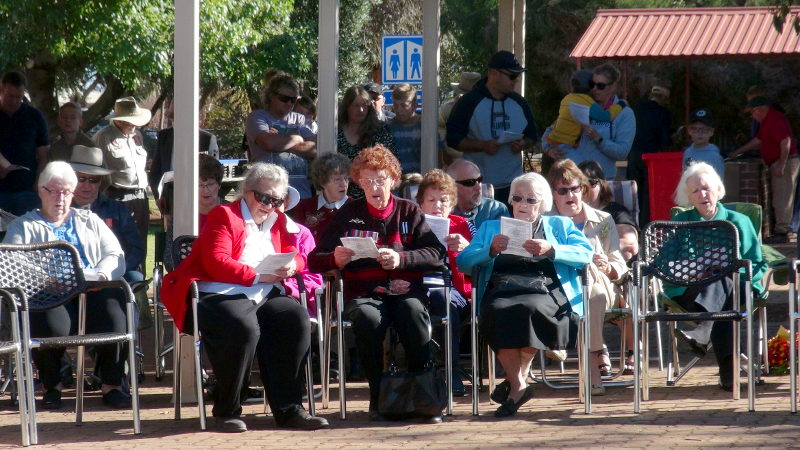 Mike Colbey led the service, with Pastor Peter Pfitzner giving the readings and address. Peter spoke of a man who served in the Second World War to return home to South Africa and how he observed the Africa animals and developed an agricultural practice called ‘regenerative agriculture’. 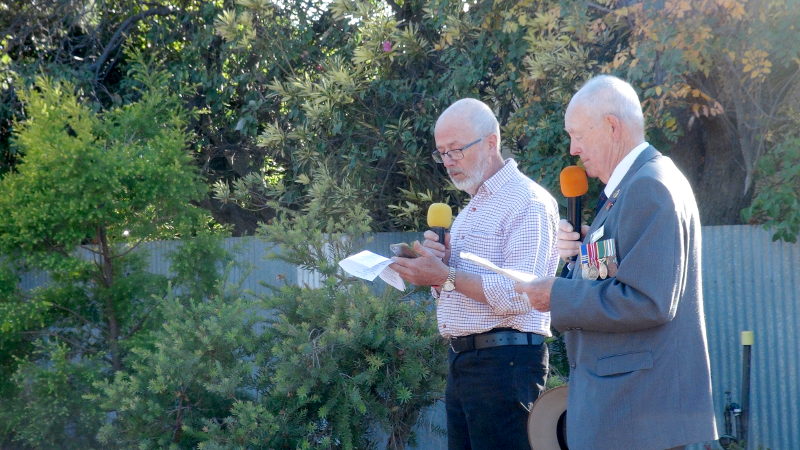 One must mention that last year Cr John Neal introduced the new planting of roses named ‘We will remember them’ which had been planted behind the Robertstown War Memorial. The roses were sent specially from France. What a splendid showing they had this drought affected year.

The memorial roses beauty was well matched though, by the many wreathes and flower tributes laid by the community organisations and businesses as well as some individual tributes. Congratulations to the ladies of Robertstown who work hard to put together so many beautiful flora tributes for this special day. 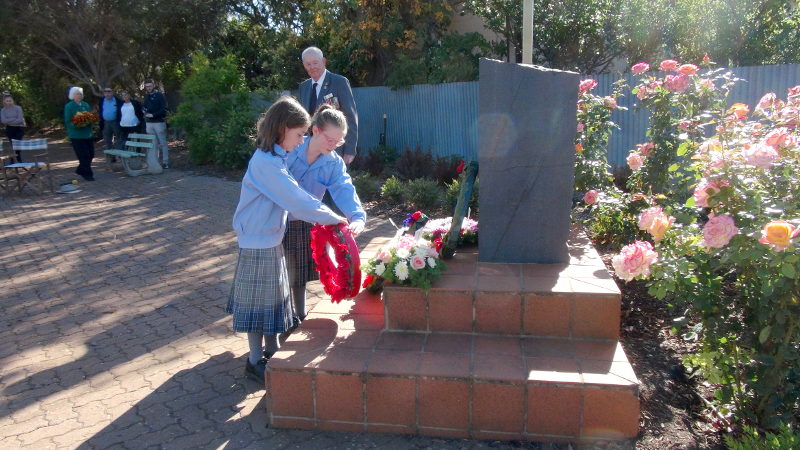 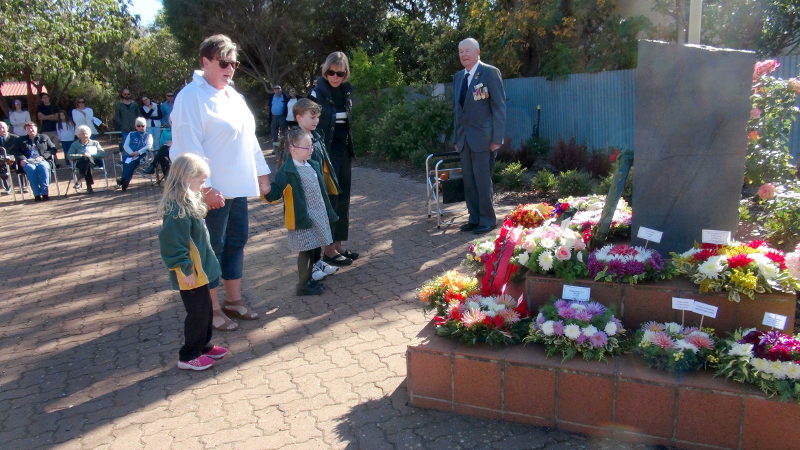 After the service everyone remained behind for the traditional BBQ and chat.

Both the Eudunda dawn service and the Robertstown morning service were recorded and played to the residents at the Eudunda Hostel straight away that same morning. A lovely presentation of flowers from the Robertstown ladies who made the many flower arrangements for the previous ANZAC services was given to the Hostel residents.

Everyone, both Hostel residents and the nursing staff were proudly wearing crocheted poppies lovingly made by one of the residents, Yvonne Burgermeister who proudly told that she had made 29 of them, one for everyone..

This was indeed a lovely gesture on Yvonne’s part and was indeed a reminder of the many hours and hard work that the ladies left behind during the wars did to support those off fighting with “Care packages”. One can only imagine the lift in spirit that those service personnel must have experienced when they received a package from Australia.

Everyone at the Hostel was very thankful that they could be included in the districts services, which bought back many memories.